The Open Threat Model (OTM) standard is a generic and tool agnostic way of describing a threat model in a simple to use and understand format. It has been designed to allow greater connectivity and interoperability between threat modeling and other parts of the Software Development Lifecycle (SDLC) and cybersecurity ecosystem. Released under Create Commons, anyone can contribute or use the standard.

Key use cases for an open threat modeling standard include:

In this article we’re going to take a close look at the specification and how IriusRisk implements and uses it to automatically create threat models from CloudFormation templates. For the full specification see the Open Threat Model project repository. To learn how to create a simple parser that generates OTM see How to create an OTM parser.

An overview of the OTM specification
It makes sense to start by looking at some key elements and features of the specification. The specification is written as YAML (or JSON) and is broken up into a number of high level objects:

There are few other interesting things to note about the specification:

Project
The project object contains metadata about the thing being threat modelled. The name and id fields are required, but other useful fields include a description, owner, and owner contact. You can use the attributes field to link your project to documentation hosted elsewhere or to the relevant asset in something like a CMDB.

Here we can see an example of an architecture diagram representation.

Because an OTM file can include multiple representations, that means you can include the full threat model of a given application or system, from each of the different perspectives.

Trustzones
Trustzones are a core part of any threat model. They provide key context about how components within a threat model are expected to behave and where threats are going to have the biggest impact. If you’ve got a completely untrusted zone such as the Internet connected directly to a highly trusted zone such as a data tier, you may find that a simple configuration error could easily expose the sensitive data to the world. The OTM specification uses a trustRating property to describe the expected level of trust and security of the trustzones.

Each component has a human readable name field, but also a type field. This type field helps to describe what type of object it is. For example, in a threat model you could have two different web services Web1 and Web2, both of the same web-service type. While they are different entities in the threat model itself, because they are the same type, we can expect similar threats and controls to apply to them.

Components also have a parent field. Typically this will be a trustzone, but a component can also be nested inside another component. For example, you may have a Rest API component inside an AWS EC2 instance component.

Tags are especially useful for components because they allow you to provide additional values that further describe the components in an arbitrary way. This can be useful for group or filtering.

Dataflows
Finally we’ll look at dataflows. These are the literal flows of data between components within a threat model. They can be network-level flows such as HTTP or DNS, or they can be higher level flows such as “user login” or “product search”. Of course, a data flow needs a source and a destination component. It can be unidirectional or bidirectional. And similar to components, tags can be used to provide additional context useful for grouping and filtering.

Using OTM with IriusRisk
IriusRisk has released an OTM API in version 4.1 of the product. This API allows you to provide an OTM file and IriusRisk will automatically build a full threat model using the rules engine an extensive library of components and risk patterns. The first release of the API supports trustzones, components, and dataflows. Threats and mitigations are already in the specification, and support for them in IriusRisk will be coming soon.

The rest of this article will focus on building a threat model in IriusRisk using OTM. We’ll start off with a simple HelloWorld OTM file created by hand in an IDE, and then we’ll build one from a CloudFormation template using the open source Startleft tool. For both of these examples, we’ll need to set a couple of environment variables used to connect with the API:

It has two trustzones, two components, and a dataflow. This file can be sent straight to the IriusRisk OTM API using a simple curl command:

Here is the threat model created by IriusRisk:

As you can see, because the rules engine has executed, it has automatically pulled in threats and countermeasures that would apply to this threat model: 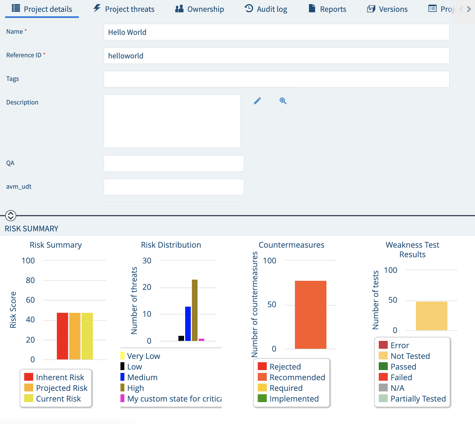 This code snippet shows a section of the CloudFormation template we’ll be using.  As you can see, the file uses Amazon's Elastic Container Service as well as a number of other resources such as CloudWatch alarms.

Using the Startleft project we can parse it into OTM with a single command.

The mapping file provided describes how to find resources in a CloudFormation Template, and how to map them into an OTM threat model. This gives us an OTM file which look something like:

We can now upload this OTM to IriusRisk using Startleft.

Logging in to IriusRisk we can see it has built a full threat model. This isn’t just a visualisation of all of the resources in a CloudFormation template. What we can see here is an architectural view of the cloud infrastructure. 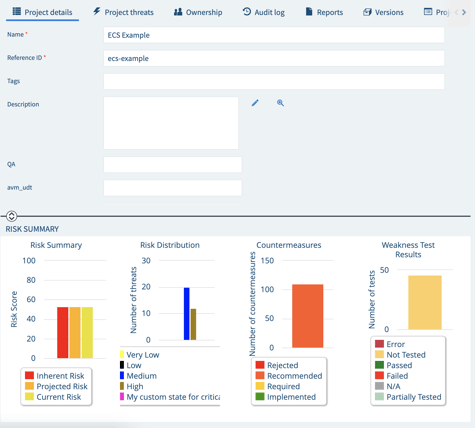 Conclusion
The Open Threat Model standard gives us a flexible way to describe threat models which can be used throughout the SDLC and cybersecurity ecosystem. It’s simple enough to be able to create threat models by hand, and powerful enough to represent full threat models generated from Infrastructure as Code. 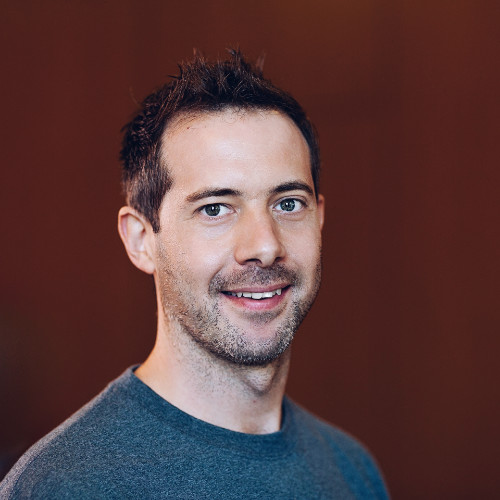 Fraser is a threat modeling product manager and evangelist. As a cyber postmodernist coming from a background of DevOps and Cloud Security, he believes that threat modeling offers a pragmatic toolkit for navigating the complex and ever-evolving intersection between software, value, and risk. He has created several experimental opensource projects including ThreatSpec and the OWASP Cloud Security project. As VP Product, Fraser is responsible for ensuring that IriusRisk gives our customers the threat modeling solutions they need to build awesome products that are secure by design.