We are proud to announce the release of IriusRisk 4.3 containing a brand new way to navigate projects, as well as:

Projects are a central part of IriusRisk because that’s where the threat modeling happens. So it is essential that project creation and management is intuitive yet powerful. This release brings with it a major improvement to how you navigate projects: 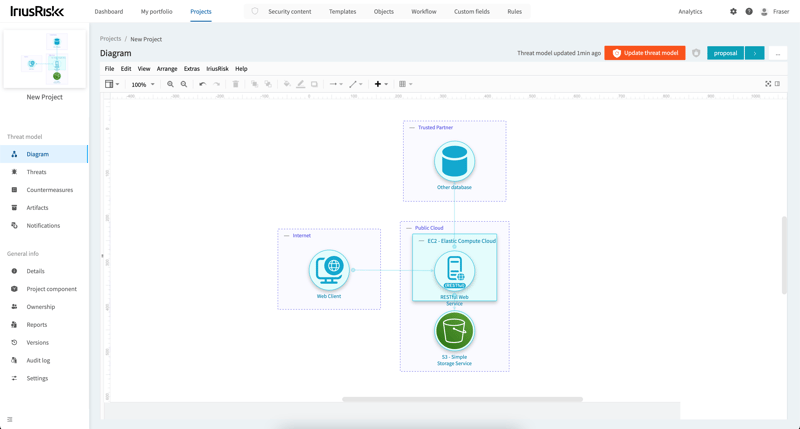 For details on the differences between the old and new navigation see this support article.

This release includes quite a few new API endpoints as well as an improvement to the projects endpoint.

Following the release of our Open Threat Model (OTM) and CloudFormation endpoints, we have now released our Terraform API. This first release of the Terraform endpoint parses Hashicorp Configuration Language (HCL2) files with support for some basic AWS components in the default mapping file. We’ll continue to improve the default mapping file but if you need to customize the mapping you can provide your own mapping file to the API. See the API documentation for more details on using the API, the Startleft project on Github, and check out the OTM specification on Github as well.

Automated threat modeling is what we do. But even with a powerful rules engine and extensive knowledge base, sometimes you need to add your own threats and countermeasures to a project. Until now it has only been possible to manually add threats and countermeasures to components within a project through the user interface. As of 4.3 you can also do this through the API, taking automation to a whole new level.

See if a project is currently syncing

Operations within IriusRisk happen asynchronously, so calling an API such as creating a new project will return immediately, even if the rules engine is still running in the background. The project API endpoint now includes a new field that will be true if the project threat model is in the process of being updated, and false if not. This means that you can poll the endpoint rather than wait some arbitrary amount of time, which is especially useful when automating your threat modeling through OTM.

Speaking of synchronizing a project, there is now also a new API endpoint to trigger the update of a threat model based on diagram changes and the rules execution. Previously you could only execute the rules engine via the API, but if a diagram was in draft mode those changes were ignored until somebody pressed the “Update threat model” button in the UI. With this new endpoint you can trigger that same update action without going into the UI.

In addition to the project navigation improvements above, there have also been some improvements to project diagrams.

Threat modeling and IriusRisk is all about collaboration - whether that’s within the security department or between security and development teams. As the next step towards true real-time collaborative diagramming, multiple users can now concurrently edit a diagram if they are both on the same IriusRisk instance. If one user is updating the diagram, the others will see the update happen on their screen in real-time. The only limitation at the moment is that this won’t work if the users are connected to different instances in a High Availability (HA) environment - this is something we will be implemented in future.

The Diagrams.net version that IriusRisk uses for diagramming has been updated to 17.x giving a number of performance improvements. 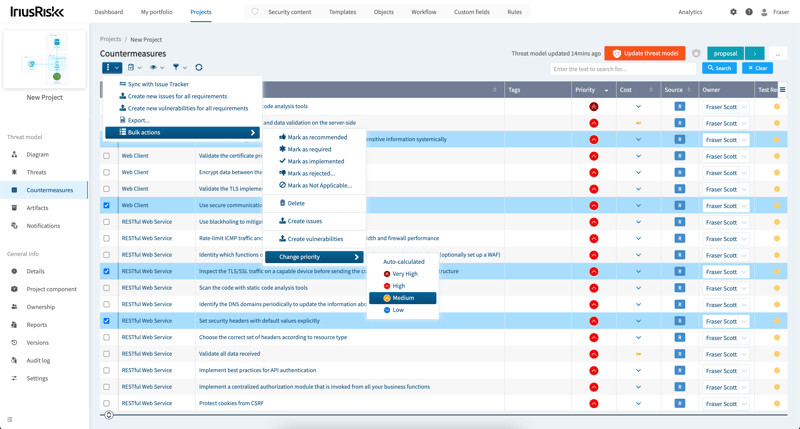 Another improvement is that countermeasure filters now support multi-select.

The Compliance Report has a new cover page that includes the project diagram as well as an improved layout of the sections throughout the report. Whereas content was previously structured using tables, this has been replaced by a much clearer heading and indentation structure. Previously the sections were structured as: 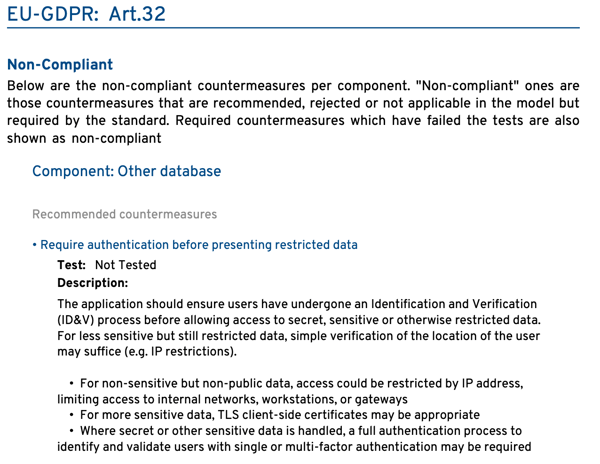 We have also improved the performance of the rules engine, specifically the importing of risk patterns.

Finally, a new support article has been created that describes in detail all the different modules, conditions, and actions of rules.

This release includes improved threats and countermeasure content for: